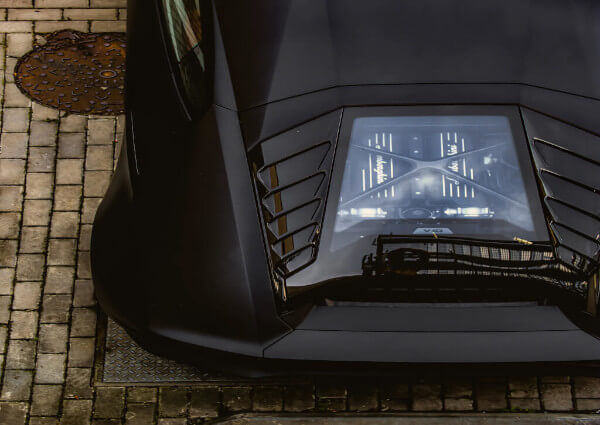 For a market that is seemingly obsessed with sedans and SUVs, it’s surprising that the best-selling passenger car in Malaysia over the past decade has been a hatchback – the Perodua Myvi. That could easily change should a Myvi sedan exist one day, but let’s not hold our breaths.

Meanwhile, existing owners planning for a badge upgrade can soon get their hands on the 2021 Honda City Hatchback. In terms of pricing, the hatch is expected to cost slightly less than its sedan counterpart, which ranges from RM74k to RM106k. A slight reduction in price will help it fit in the same bracket as the Toyota Yaris, which is priced between RM71k to RM85k.

We’re not expecting a big drop in equipment levels, so the feature set between the hatch and sedan should be like for like. We’ll only know for sure during the launch, because the fleet of three (two RS e:HEV, one V) at the Sepang International Circuit were so-called pre-production models.

What can buyers expect?

Well, going by its dimensions, you can expect a shrunken boot volume. With an overall length of 4,345 mm, the City Hatchback is over 200 mm shorter than the sedan, all of which came from the compressed rump. We don’t know the actual boot volume just yet, but you can bid the sedan’s cavernous 519L space goodbye.

What it gains, though, is Ultra Seats. This flexible four-mode seating adjustments alone will make up for all your loading needs, easily swallowing things such as a standing barbecue pit, an electric bicycle, or even a surf board. This feature is basically carried over from the outgoing Jazz, and remains unchallenged in the segment to this day.

Like the sedan, non-hybrid models should still get a space-saver spare wheel under the boot floor. The RS e:HEV, on the other hand, will get a tyre inflator kit instead, due to the fitment of the lithium-ion battery pack at the back.

Rear passengers also gain additional headroom space, thanks to a flatter and longer roof profile. At 1,488 mm, the hatch is 21 mm taller than the sedan, but still not as tall as the Jazz (1,524 mm). However, in terms of sheer size, the City Hatchback is in fact longer and wider than the Jazz.

By the looks of it, there will also be at least two new colours making their Malaysian debut – Ignite Red Metallic and Meteoroid Grey Metallic. The grey is a much darker shade compared to the existing Modern Steel Metallic, and looks fairly close to Audi’s Daytona Grey Pearl. If Honda Malaysia intends to do away with Modern Steel metallic in favour of this, we’re all for it.

Four variants are expected to form the initial line-up – S, E, V and RS e:HEV. Based on what we’ve seen so far, only the RS is equipped with Honda Sensing (ACC, AEB, the works), while the V settles for LaneWatch. It’s unlikely for a V Sensing variant to be available at launch, but we’d like to be surprised.

Some minor, but meaningful upgrades 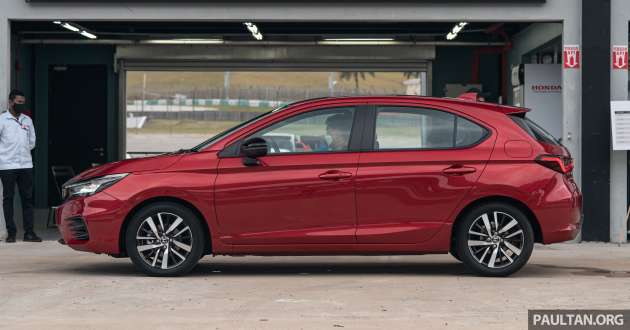 One thing that stuck out the most with the fifth-generation City was the compounded noise generated by the Earth Dreams CVT and 1.5 litre direct-injection DOHC engine at full pelt. This was taken into account when developing the hatch, so additional sound deadening mats have been used within the engine bay and under the bonnet to dampen noise. But quite frankly, that didn’t do much.

Polyurethane foam was also injected into specific areas of the car’s steel structure, a move aimed at quelling vibrations, increasing body rigidity, and improving NVH levels. The same treatment was employed for the sedan, actually, so cabin insulation is a definite step up from the previous City and Jazz.

Tyre roar also seemed a lot less intrusive on our test drive compared to the sedan, despite rolling on the exact same set of wheels and Toyo Proxes R57 tyres. This is of course due to the quality of tarmac on the circuit, which is a lot less coarse than the patchy public roads we’re all accustomed to. There were no additional insulating materials found within the wheel wells.

Structurally, Honda Malaysia said the hatch is slightly more rigid compared to the sedan. This is to account for the taller body style and compensate for the small shift in dynamics, though it’s unclear if there are differences in track width and camber settings at the rear. It still uses a torsion beam, by the way, and only the hybrid gets rear disc brakes.

Compared to the Yaris, the City Hatch rides firmer, so it’s more neutral and allows for more speed to be carried into the corners before understeer starts creeping in. It pitches a little under aggressive braking, but regains composure quickly enough to steer your way out of trouble.

Also, the rear license plate is now lit by a single LED, which is a nice (if a bit odd) upgrade from the bulbs used on the sedan. Forward lighting is full LED (both the RS and V), while the rear gets LED combination lights as standard. Other details include a rear windscreen wiper, vertical reflectors, and a conspicuous exhaust pipe and muffler. The RS is dressed much the same as the sedan, save for the chunky faux rear carbon diffuser.

Powertrain and drivetrain offerings are identical to the sedan

Motive power across the range is unchanged, so the S, E and V will get the L15B1 1.5 litre four-cylinder engine that develops 121 PS at 6,600 rpm and 145 Nm of torque at 4,300 rpm. The DOHC i-VTEC lump has four valves per cylinder, and drive is sent to the front wheels through a CVT.

Performance-wise, the engine is demonstrably more eager and athletic than the outgoing Jazz’s SOHC mill. This was evident on an uphill acceleration test at Turn 10, which clearly showed that the new hatch had more oomph than the Yaris.

The i-MMD hybrid system in the RS is also the same as the sedan. A very cursory understanding of how it works goes something like this – the RS e:HEV is basically an electric car with a 1.5 litre Atkinson-cycle engine that performs two key roles – to act as a generator to recharge the battery, and to provide direct mechanical drive to the front wheels at cruising speeds. 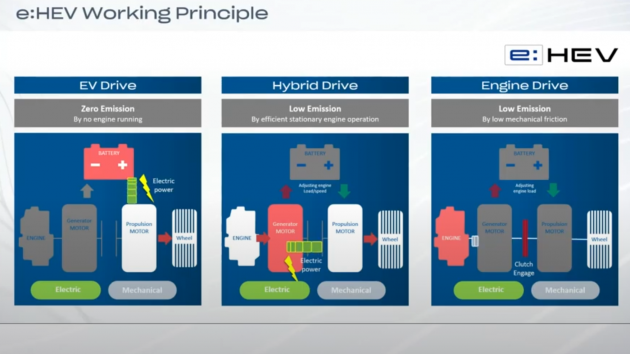 It’s not quite the series hybrid like Nissan’s e-Power range extender system, where the electric motor powers the car 100% of the time, and the engine’s sole purpose is to charge the battery.

The Traction Motor in the City RS makes 109 PS and 253 Nm of torque, but as per our previous review, i-MMD performs about as good as the regular L15B1. On paper, it is reportedly quicker in the century sprint, but they feel equally brisk in the real world. In terms of outright engagement, i-MMD is a completely different breed compared to the older and sportier i-DCD Sport Hybrid system with the seven-speed DCT.

The truth is, i-MMD is a complex system that’s designed to be more efficient than powerful. During our test with the RS e:HEV sedan, we averaged about 3.8 litres per 100 km, or 26.3 km/l in mixed driving conditions. That’s close to the marketed 3.6 L/100 km, which is impossible to achieve with just the L15B1 alone. 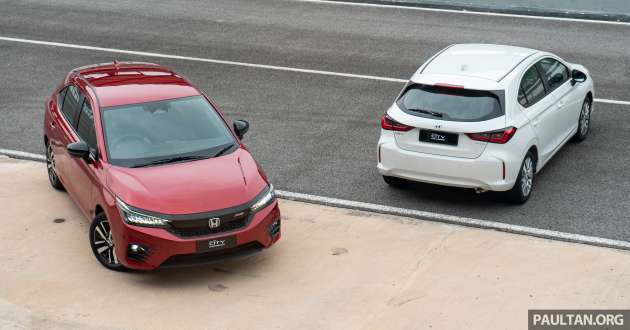 As we have alluded to in our intro, if given the choice, most people would opt for the sedan. Going by statistics, Honda Malaysia sells three to four units of the City sedan for every Jazz sold. This time, however, it all boils down to preference, and which rear end you fancy more. Each of them has some resemblance to a certain Mercedes-Benz and BMW, and they both look better in the flesh.

Personally, the real selling point for me is the Ultra Seats, because the flexibility it offers is just unrivalled in a car of its size. Rear seating space is also class-leading, plus the new DOHC engine is one of the most punchy mills in its segment. Not much can go wrong here, and it would be interesting to see the sales ratio between this and the sedan. After all, there hasn’t been a hatchback version of the City since 1994.

If you own the previous Jazz, this isn’t much of an upgrade. But we’ll say this: for those stepping into this territory for the first time, nothing comes close to matching the level of practicality the City Hatchback offers. If you run a small online business or frequent the grocers (or Ikea for that matter), this one’s it. Oh, lest we forget, Apple CarPlay and Android Auto come as standard, too!