The government’s proposal to exempt electric vehicles from import, excise and road tax, announced during the tabling of Budget 2022 in October, was widely lauded by car companies and consumers alike. It has also already led to positive results, as demonstrated by the attractive prices of the recently-launched Hyundai Kona Electric.

But while price is a significant part of the EV conversation, it’s not the only hurdle for widespread public acceptance. There are also the issues of local EV manufacturing and assembly and the all-important charging infrastructure, and industry observers say that without a clear policy, Malaysia will continue to lag behind in EV adoption, The Edge reports.

According to Malaysian Electric Vehicle Owners Club (MyEVOC) president Datuk Shahrol Halmi, while the tax exemption will help boost demand and make the case for investing in fast charging infrastructure, the two-year eligibility period will prevent outside players from coming in. “The two-year limit will deter folks like Tesla from coming in, which is a pity, since they are excellent at building charging infrastructure,” he said.

Tesla already has a presence in the Southeast Asian region in Singapore, where it sells the Model 3 and operates three Supercharger fast charging stations. While these stations are currently limited to Tesla vehicles, the Silicon Valley carmaker plans to gradually open up its Supercharger network to other EVs and has already begun a pilot programme in Norway. 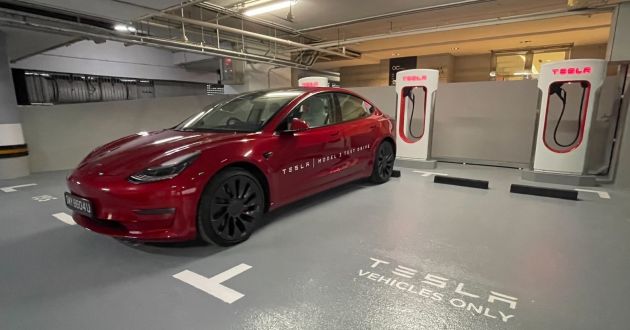 Tesla already has a presence in Singapore, but an expansion into Malaysia is unlikely

There’s also a lack of a clear direction when it comes to charging infrastructure. While the government has provided an income tax relief of up to RM2,500 for individuals purchasing a home charger, it remains to be seen if companies will be incentivised to invest in building public charging stations.

Malaysian Automotive Association (MAA) president Datuk Aishah Ahmad said the organisation is grateful for the long-overdue tax exemption, which will encourage car companies to build EVs in Malaysia. “However, infrastructure development and availability of electric charging stations must also be developed and made available throughout Malaysia,” she added.

The good news is that there is some movement on that front, ironically with petroleum retailers leading the charge. Shell is working with Porsche and BMW to install fast charging stations along the North-South Expressway to alleviate range anxiety concerns, as will Petronas with Mercedes-Benz. Both firms are expecting to complete their pilot projects by the first half of next year.

A number of electric vehicles have been launched in the past year,

including the Hyundai Kona Electric (left) and BMW iX (right)

“EVs are not like combustion engine vehicles. The bulk of the vehicle comprises electrical and technological components. To support this, Malaysia needs more people in research, engineering, innovative technology expertise and development of vehicle design and battery technology.

“Education plays a crucial role. We must focus on training and upskilling people in the auto sector to be ready to work with the next generation of technology,” he said, adding that the government needs to consider policy and research and development grants to encourage entrepreneurs and manufacturers to participate in e-mobility development.

The publication said that a clear EV policy should also include a timeline for the government to phase out internal combustion engines, as many countries have already pledged. Shahrol agreed, saying that Malaysia should begin engaging the public on the costs of fuel subsidies and work out a plan to gradually remove them to price people out of using ICE-powered vehicles. “They can start with a congestion charge for ICE for the KL city centre, and have a timeline to enforce a carbon tax, maybe to begin in 2025, with a token sum.”

Proton has confirmed it has plans to build electric vehicles,

Aishah, however, said that banning ICE vehicles would not be a good idea and could cost the ruling government in the elections, as lower-income groups would still need access to more affordable vehicles that use legacy technologies.

For its part, the tax exemption proposal has stimulated some encouraging movement in the automotive sector, with companies like Mercedes-Benz announcing that a range of electric vehicles will arrive starting next year. As for the national carmakers, Proton has confirmed that hybrid, plug-in hybrid and full electric vehicles are in the works, while Perodua is currently conducting a market study on hybrid cars.

The latter, however, is ruling out full electric vehicles at the moment, saying that hybrid vehicles are currently the more eco-friendly solution for Malaysia given the country’s reliance on coal power.

Did you miss our previous article…
https://karltwiford.net/?p=4756