The road transport department (JPJ) has reminded the public it remains an offence to put number plates that do not conform to specifications on vehicles, reiterating the point via a social media post on its FB page that includes image examples of fancy vehicle number plates not complying with specifications.

Aside from illegal stylised fonts and surfaces (such as carbon print), the illegal plates JPJ are alluding to are those with merged or modified letters/numbers to read a phrase, name or other meaning, as seen on these examples above. They do not impact approved special plate series’ such as PERFECT, PATRIOT and the government-issued Malaysia special series, which are permissible. 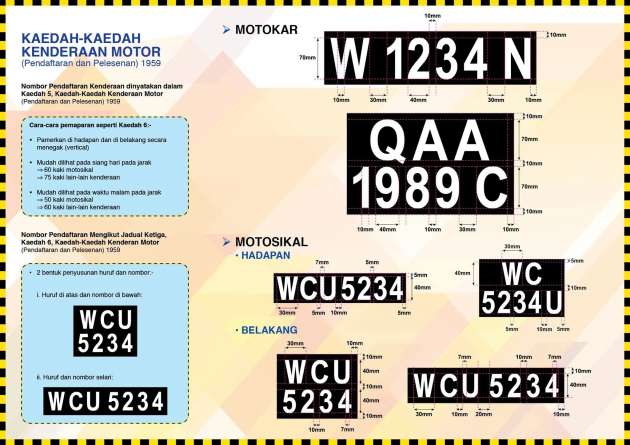 Motorists are advised to comply with rules outlined in specifications set under the Road Transport Act (APJ) 1987 when installing vehicle registration numbers on their vehicles. If found in violation of the rules, vehicle owners will be taken to task, and can face a fine of not less than RM300 and not more than RM3,000 under Section 14 (4) APJ 1987.

Similar to the call made last year, the department advised the public to report any vehicles that have confusing, vague or fancy registration plates by taking photos and submitting them to the department via email at [email protected], along with other relevant details.

Did you miss our previous article…
https://karltwiford.net/?p=2460